This can’t be right, I thought, ascending the worn stairs. Number 17, number 18, number 19…how can there possibly only be 19 apartments in this building?!

Holding my breath like the trespasser I feared I may have just become, I retraced my steps downstairs.

I stood in the empty lobby, leaned my massive green backpack (MGB) against the wall, and rechecked my phone—not that I needed to see the address again. The Turkish words could have meant anything, but at least the numbers make sense. Sort of.

The taxi driver definitely seemed satisfied when he dropped me off here. Sure, I didn’t know which buzzer to press to get inside, but the door opened anyway. But from what I gathered by reading the numbers on the address, there MUST be more than 19 rooms!

I didn’t want to accept the fact that I might well be wandering around a random apartment building in Turkey, but reality refused to right itself. If I’d thought to download the address to my GPS earlier, or if the airport had offered free Wi-Fi, or if SIM cards hadn’t been so expensive, or if my bank card had let me withdraw cash for a bus ticket, or if the taxi driver had known where I needed to go, maybe reality would have been different. But now I had to stand eye-to-eye with the facts:

I have no map, no Wi-Fi, no working phone, and no cash; I’m in a new city, in an Islamic country where I’ve never been before, where almost nobody speaks English, and a taxi just dropped me off at the wrong apartment.

Breathing a prayer, I returned to the narrow cobblestone streets. I’d simply have to ask someone for directions.

Presently, a business owner popped his head out from a doorway near where I stood alone, MGB on my back, gazing down the quiet hillside street.

“Do you know where this address is?” I asked, showing him my phone. He stared at the screen, spoke something I didn’t understand, and waved an arm uphill. Another passerby appeared, and the two men began wildly gesticulating and offering me directions in Turkish, while I joined in the arm-waving and requested clarification in English. Soon deciding that this bilingual ballet had gone on long enough, I thanked the men and headed uphill in the general direction of the arm waving. That’s when an English-speaking pedestrian met me.

“Let me help carry your bags.”

Thus, with more than one weight lifted, I followed the English-speaker to the correct building not so far away.

As nice as it would be to say that I learned my lesson after that, I again wound up lost the following Sunday after failing to save the location of a cafe where I’d planned to meet a friend for “Turkish breakfast.” The grey cobblestone streets resounded with my increasingly agitated footsteps as I tracked a hopeful course through mazes of shops and cafes, checking for open wifi every few meters. 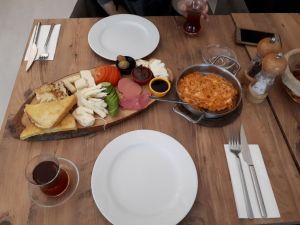 Upon finally finding an English-speaking girl who downloaded a map for me to photograph, I located my friend, tackled a traditional breakfast (which to North Americans might look more like lunch) and headed to church. A bilingual service followed, with a worship leader who happened to be a nursing student.

“We don’t have any Bible studies at my university,” he said as we visited after the service. “I don’t know a lot of people who are Christian, except for exchange students who come for just one semester. We don’t speak about Christianity a lot. Many people don’t like Christians, but in the university I don’t have a problem with that. If I talk with my neighbours outside campus, though, that’s a little bit challenging.”

“But you don’t hear negative comments about Christianity from professors or classmates?” I asked, recalling accounts of such experiences from Christian students—including myself—in other cultures.

“I haven’t heard any of those bad things,” he replied, “The teachers are high quality people. Most of them are open, and I don’t think they would force me to believe another religion.”

Given that Islam is a monotheistic worldview, I later reasoned, with worshipers revering a single God, it  makes sense that Christians may face fewer hostile remarks about “religion,” fewer references to accounts like Genesis being mythical, and possibly less peer pressure of the types that Western Christian students face. Christians in different cultures will naturally encounter different challenges on campus.

In Turkey, where 99.8% of the population identifies as Muslim,1 one of those challenges is the comparative lack of Christian community on campus. The nursing student’s comment about not knowing many Turkish-born Christian students reflects this, as did the fact that I found no other Christian students to interview throughout my whole week in Turkey. However, I did connect with a campus ministry leader in another part of Turkey, via video chat. Despite working at almost every campus in Turkey,  this leader only knew of about 100 Christian

students in the whole country!

“People don’t expect that you will be a Christian as a Turkish person,” he said, emphasizing the lack of Christians in the culture—and therefore, the limited fellowship available to students. “When people learn that I’m a Christian from the most conservative place in Turkey, they’re just shocked.”

Again, this line of thought brought me face to face with the importance of connections between Christian students and the local church.

“How can churches in Turkey support local Christian students?” 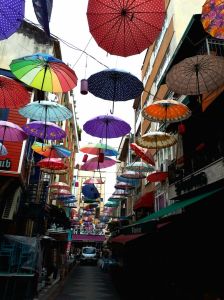 “The young people have really good potential,” replied the leader, “the church needs to give them opportunities to grow. That could be the best way to support students. We need to give students the resources, vision, and opportunity to serve. My church does discipleship this way, helping students learn their spiritual gifts.  But most of the time, people don’t give young students opportunities to lead, because they don’t trust them.”

Just like what the youth ministers in the United Arab Emirates said last week, I remembered, appreciating anew their initiatives to develop leadership skills among their church’s youth. Channeling youths’ God-given skills to serve the church this way lifts up the body of Christ, builds youth’s spiritual foundations by stretching them to depend more on God and strengthens the bond between youth and their surrounding Christian community. And especially in places like Turkey, where other Christian students are so hard to find, strong community is more imperative than ever. Without it, students may all too easily begin to feel like I did while standing with my MGB in the wrong apartment building: lost, stuck, burdened, tired, unable to communicate, and alone. Maybe, like me, all they need is for someone who speaks the same language to come alongside them, lighten their load, and lead them to a safe home base where family awaits.

2 comments on “Lost in Turkey: Seeking Campus Christians in a 99.8% Islamic Nation”