“It was providential that you came here,” said the bearded chaplain as he rose to leave.

I couldn’t help but agree. When I’d stepped onto the large Canadian university that morning as a “test run” for investigating the challenges of being a Christian on campuses worldwide, I’d had no idea what would happen. There hadn’t been time to contact any local university ministries, and I didn’t know a soul on campus.

“Do you have an accent?” asked the bus driver as my coins plinked into the fare box. “You sound Australian.”

I grinned. Strangers had commented on my ‘accent’ before. “I’m from here, but I’m going to Australia soon….”

After an unexpected half-hour conversation with the driver, swapping travel stories and speculating on the natural predators of kangaroos, I found myself standing on the curb before an academic skyline.

To get a feel of the general worldview climate on campus, I wandered into the nearest structure and started scanning bulletin boards inside. You can learn a lot about a university culture by what students and professors post around campus, so I began exploring science and humanities buildings to check out papers displayed along hallways or outside office doors. Among the usual course announcements, lecture invitations and concert advertisements, I spotted posters promoting everything from Bible studies to yoga sessions to communism.

And I couldn’t help but notice a few cartoons mocking Christianity, posted on faculty doors somewhere in the labyrinth-like botany wing. Memorably, one depicted Jesus walking on water as Moses parted the Red Sea, with the penciled-in caption, “When fables collide.”

As interesting as this investigative photo safari was becoming, I still needed to talk to someone who could tell me about the worldviews on campus. A chaplain maybe? My smartphone hinted that a chapel existed somewhere in a religious building on campus, so I headed to the stately brick structure. Pushing open the heavy wooden door, I stepped into an vacant, tile-floored corridor which smelled distinctly of roast chicken. Maybe it was just my nerves, or maybe a reverent hush really did cover the atmosphere like a weighted blanket. Rows of wooden pews stretched into the dim recesses of a chapel to my right, and I could see a robed hand waving beyond a half-open vestry door.

Uncertain what to do, I paced the building’s length twice, passing a glass case which prominently displayed several faculty-authored theistic evolution books.

Who should I talk to, and what could I say— “Hi, I’m looking for information about the spiritual climate on campus?” That would never do.

“Can I help you?” asked a lady, stepping into the hallway where I loitered.

“Hi! I’m looking for information about the spiritual climate on campus!”

The woman gazed at me uncertainly as I tried to explain my project. “I could talk to you,” she offered, ushering me into a small office.

While I didn’t glean many specifics, she pointed me to a separate nest of chaplains sequestered somewhere under the arts building.

“Chaplain’s Centre: down the stairs and to the right,” insisted a sign.

Soon hopelessly lost, I retraced my steps and tried going down the stairs to the “other right.” (Directions and I rarely get along.) Finally, I saw the Centre. 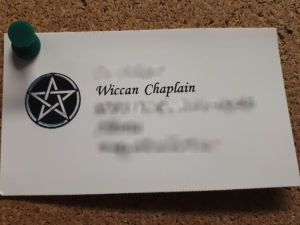 Stepping inside, I walked to the nearest bulletin board, where a duly-posted business card immediately caught my attention with the words “Wiccan Chaplain.”

I wandered into the empty seating area, where a kale salad lay unattended. Someone would have to come for it eventually, I reasoned, so sat to open my laptop.

“Are you looking for someone?” A tall, bearded man stepped out of a nearby office. He agreed to let me interview him, explaining that before coming on campus as a Reformed Christian Chaplain, he’d been a youth pastor for nearly three decades.

“What can you tell me about spirituality here?” I asked.

“For North American students, spirituality seems to be an add-on.  It’s more often international students who don’t separate spirituality from the rest of their lives.”

“So, would you say this indicates that spirituality is less important to North Americans?

He nodded, relaying a story about student who had told him, ‘I don’t need religion, because I am well-grounded.’

“I thought it was such a telling remark,” said the chaplain, “because it suggested that religion is what you have when you don’t have knowledge. He’d grown out of needing that anymore. I think that that is somewhat representative of many people’s attitudes toward faith on this campus.”

“There is some hostility reserved specifically for Christianity,” he continued, “and other faiths are sort of trending, so they’re of some interest. There’s a bit of synchronicity; there’s a tendency to pick and choose parts from different religions and put something together that works for you. But on that score, it’s less likely that elements of Christianity are picked up, aside from love your neighbour and respect each other as human beings. But Jesus Christ being our only contact with God directly is rejected for the most part, because people are much more likely to say, ‘that’s probably a way to God, and there are other gods; all roads lead to Rome.’ So, as soon as you begin to speak in the exclusive terms of Christianity, large swaths of audience are lost.”

“So where do you think hostility is the strongest?” I asked.

“It depends from faculty to faculty. Anthropology is a really hard one.”

Instantly, my find flashed back back to my own first year anthropology course—the one where the professor questioned the existence of Jesus, suggested that students who didn’t accept evolutionary human origins should reconsider taking the course, and stated that “God did not create people, people created God.”  But the chaplain continued.

“What’s permitted in the academy is a discussion about cause but not purpose. I think there are two ways to know purpose in life: 1) to listen to what the Originator tells you, or 2) to see it retrospectively when life ends. But nobody was there at the beginning, so there are theories that we hold on to. Purpose is not an allowed discussion.”

Recalling my numerous classes on biology and its history, I could certainly attest. How many times had I heard professors emphasize that no explanation in science can be teleological? In other words, we learned not to interpret anything in biology, whether a turtle’s shell or a biochemical process, as existing because it was somehow supposed to exist through purpose or forethought. Anything can have a function, but nothing can have a purpose.

“Looks like it all comes back to meaning and origins,” I observed. “So, what happens to Christian students who step into this scene?”

“A very painful thing for me to watch,” he confided, “is when these people that I’ve walked alongside as a youth pastor and tried my best to prepare for life at university lose their faith. I find most often that it’s because they were sheltered from very real ideas that others buy into as truth, like evolution. I don’t have a problem at all with evolution, so I’ll teach them evolution. But many of their Christian counterpart adults will not and do not. And when students get to university, they meet this theory held as valid for so many, and they feel like they’ve been betrayed by their faith community. They reject their faith because it has no traction in the world that they’re in now. They give it up.”

Interesting. While personally having some theological concerns with Darwinism, I had to agree with the chaplain’s main premise: students need equipping before they hit the campus hallways. They need to understand mainstream ideas and suppositions, to be aware of common arguments against their own worldview, and to be prepared with strong spiritual, intellectual, and interpersonal foundations.

On that note, my new chaplain friend left me with a hopeful message, citing a finding from the National Survey of Youth and Religion:

“Emerging adults having histories of positive social ties to supportive nonparental adults in their teenage religious congregations will…increase the chances that they will remain religiously committed and practicing five years later.”1

“Having just one committed Christian adult in a student’s life makes a huge difference,” explained the chaplain. “I want to be that one adult.”