In logic, an argument is a set of statements that work together to support a conclusion. But not all arguments are equally logical. Here’s how to recognize sound arguments, so you’ll be better equipped to identify flawed reasoning when you see it.

Trick question: which of the following scenarios portray(s) an argument?

All these scenes do involve arguments in the sense of disagreements between people. But in logic, an argument is something more specific. It’s a set of statements known as premises which are meant to support another statement called the conclusion. For example,

While this argument follows sound and valid reasoning, not all arguments are equally logical. Let’s see how to characterize different types of arguments so you can more easily discern trustworthy messages from persuasive deceptions.

Clearly, the conclusion you are not a pet owner does not necessarily follow from these premises because there are other ways to be a pet owner besides having a cat. So, this argument is invalid, involving a fallacy called denying the antecedent.

So, are all valid arguments safe to believe? Not necessarily. For example,

This argument follows a logically valid structure called denying the consequent. Does that mean its conclusion is trustworthy? Not unless all its premises are true. And Premise 1 claims that a loving God and a world of suffering could not coexist within the same reality. But, as other articles explain, the Bible reveals that God is loving, and suffering does exist because human sin corrupted the perfect universe God created.2 Therefore, this argument is unsound.

Watch out, now. Invalid or unsound arguments may seem believable if their conclusions are true. For instance,

This argument does have a true conclusion and a logically valid structure. Yet it’s nevertheless unsound because its first premise is false (some birds do not fly). How about this example?

We can infer from Scripture and observational science that this conclusion is not true, so this argument might seem reasonable. Yet its first premise is false because apes could still exist today even if humans did evolve from a small population of them—and evolutionists do not believe that humans evolved from modern apes anyway. That’s why this argument ranks high among arguments creationists should avoid.

This may seem like a lot of vocabulary to keep track of, but Figure 1 can help with keeping things straight: 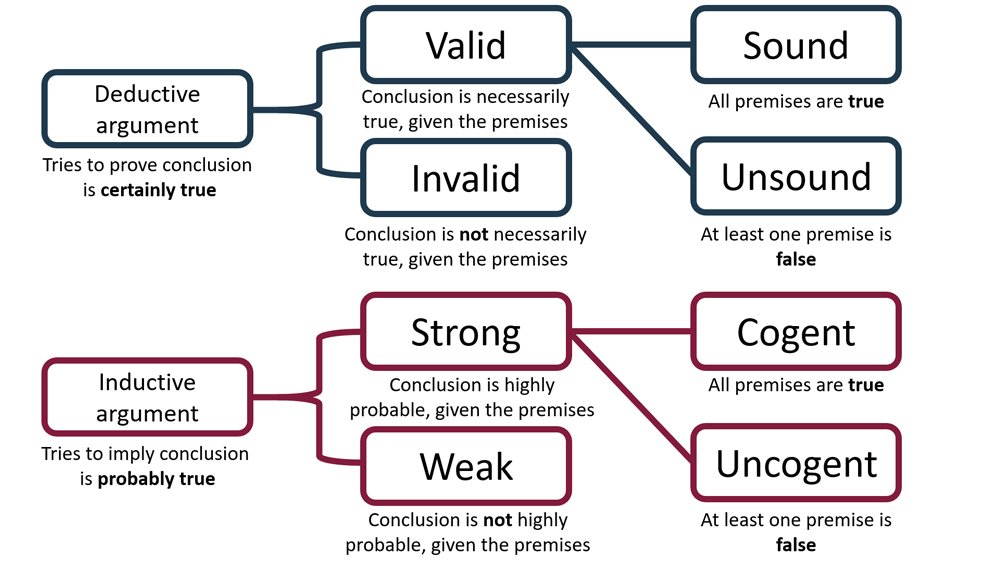 Okay, time for a quick recap. In logic, arguments contain sets of premises meant to support a conclusion. Deductive arguments try to prove a conclusion is true, with the conclusion necessarily following from the premises in a valid argument. Such arguments are only sound if they’re logically valid and all their premises are true.

Ultimately, being able to recognize a sound deductive argument will help you avoid falling for weak, invalid, or unsound lines of reasoning—and, not to mention, some trick questions.