“What’s in this one?” I asked, lifting the lid of the tiny porcelain jar. The contents looked unlike anything I’d seen before—a wet mass of something white and squishy, sitting in yellow sauce. 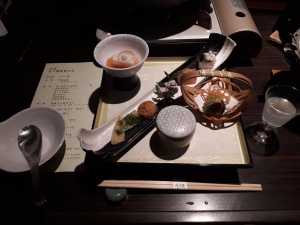 I hadn’t ordered this! But apparently, this restaurant’s classiness prohibited its guests from merely ordering anything. The mysterious paper lying nearby, its script illegible to me, seemed more like a prescription than a menu, outlining several courses of treatment—I mean, deliciousness—which I had little choice but to follow.

Gingerly, I picked up my chopsticks.

I glanced across the table at my friend, her chopsticks swishing the squid around in her own jar the way an artist might twirl a brush in paint. Following suite, I raised one of the limp, noodlelike strips from my jar and held it dangling at a distance. Then I closed my eyes, popped it like a pill, and swallowed.

The squid tasted like it looked: wet and squishy, with a mild fishy taste somewhat masked by the yellow something or other.

“I don’t really like raw squid,” commented my friend.

Now she tells me! 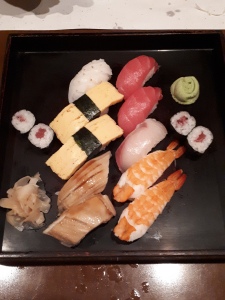 As memorable as this meal was, however, the best Japanese fare came my way a few days later, when a group of Christians gathered for the sushi party described in my last post. Included among the 15 or so young adults around the table were campus ministry leaders, students and graduates representing fields like clinical psychology, social work, education, computer physics, public administration, and neuroscience/ballet dancing.

I asked this group my usual questions about Christian student life, taking notes while different individuals relayed their answers through a translator. Their stories, when combined with insights I’d heard from other Christian students and a retired professor, revealed three major—if sometimes, surprising—arenas where Christians may experience conflict during university:

1. Conflict from the Campus:

Perhaps the least surprising of these conflict sources is the secular campus, where Christian students may expect to encounter a variety of challenges.

“Many of the public schools in Japan don’t allow any religion on campus,” said one of the sushi party guests, “but we all go to Christian-oriented schools, except for that guy over there—the PhD student. In his university, campus ministries are okay if they’re authorized clubs, with permission from the school.”

Like our campus ministries in Canada, I thought, although it sounded like Japanese universities were stricter about limiting religious activities. For example, students I’d spoken with at a Christian women’s college had also verified that most public universities in Japan prohibit Christian clubs, preferring to keep government-run institutions separate from “religion.”

“My little brother goes to a public university which does allow Christian activity,” offered one of the translators at the party, “but he said it was tough for their Christian club to even get space on campus for fellowship.”

The neuroscience graduate confirmed the difficulties which even authorized Christian clubs can face, telling a story about when he’d been handing out flyers for his campus ministry. Some of students tore up the flyers in front of him, while others didn’t accept them at all.

After two fruitless hours, however, he discovered a more receptive audience among the many students handing out fliers for other clubs. “Why don’t you tell me about the flyer in your hand” he suggested to them, “I’ll tell you about what’s in my hand?”

Ultimately, as this graduate learned, responding to conflict from campus often requires wisdom, perseverance, and maybe even a little creativity.

2. Conflict from the Campus Fellowships:

As difficult as opposition from the campus environment can be, however, another student explained that the hardest challenges he faced at secular university arose within the Christian campus clubs.

“There were two main Christian groups at my university,” said the PhD student. “Because it was a public campus, all religious activity had to be authorized. Authorization is hard to get for small groups, so the two groups combined for worship and Bible studies. But these groups’ core values were different. One of the club’s values was for students to lead the ministry, while the other club had staff leading it. This made it difficult to decide who would run the Bible studies. Our differences tore us apart, and students felt pressured between the two groups. There were a lot of hardships, quarrels and discussions. At the end, some of us had to break up to form our own fellowship. Experiencing so much conflict within the Christian group was really tough on my faith.”

Somberly, I recalled a similar story from nearly two thousand years earlier, when Paul and Barnabas—the early church’s most famous missionary team—disagreed so sharply over whether to take a certain youngster on their ministry trip that they parted ways entirely. This division, however, may have led to multiplication, as Paul and Barnabas’s parting allowed the gospel to spread in different directions. Similarly, the PhD student concluded that the campus ministry division happened for a reason—the new fellowship’s formation.

This student’s continued faithfulness, despite the toll which the inter-ministry conflict took on him, can remind Christians to hold fast to the gospel (2 Timothy 1:13) regardless of the interpersonal tensions which can arise when humans, with human natures, do ministry together. After all, even if Christians sometimes disagree about how to best advance the gospel, the gospel itself must remain true. However, the fact that this student’s most faith-challenging experience at secular university came from ministry conflicts serves as a strong warning for campus ministry leaders to “stop contention before a quarrel starts.” (Proverbs 17:14, NKJV.)

3. Conflict from the Church:

Along with facing conflicts within campus fellowships, Christian students—especially in Japan—may also encounter conflict from their churches. For example, the retired professor I’d spoken with earlier described a particular case of church-related conflict which can often arise after Japanese exchange students become Christians overseas:

“Students go to the US or Canada for several years, encounter Jesus there, and return to work in Japan. Then, they find it fairly difficult to readjust to the Japanese way. They start attending church, but they come to the service wearing a baseball cap, or they listen to the pastor while sitting like this,” the professor said, slouching down in his chair. A moment later, he assumed a perfectly upright posture, hands folded silently on his lap. “But the Japanese around them are listening like this. After three or four Sundays, the Japanese church members begin to dislike the new students.”

The importance of attending church as a student has been a key recurring theme on this trip, I thought, recalling an Australian professor’s comment that not attending church is the biggest mistake a student could make. But if conflicts, tensions and misunderstandings keep students from integrating with the rest of the church…

Fortunately, however, a little proactivity can go a long way towards solving problems like this.

For example, the professor helps run a conference in America which prepares newly-converted Japanese exchange students to readjust to Japan’s culture. Part of the conference includes a Japanese church experience, a black-suit event featuring elders, ushers, and all the formalities of a traditional service. Then, when students arrive back in Japan, the professor and his wife help the students plug into a church, coach them on etiquette during the service, and remind them to leave their ballcaps at home.

Maybe this kind of loving, Christ-centred proactivity is a key ingredient for managing all the types of conflict Christians can experience at a university setting, or in culture at large. This would fit with Paul’s exhortation to “make every effort to live at peace with everyone.” (Hebrews 12:14, NIV.)

Conflict prevention and management is an active pursuit. Peace takes work. Peacekeeping efforts might not be easy, or even effective, and the ordeal probably won’t carry a savoury aftertaste. Most people don’t like conflict anymore than my friend and I like raw squid. But considering Christian unity’s importance for advancing the gospel, stabilizing student’s faith, and reflecting Christ’s heart for His church (John 17), Biblically-sanctioned steps toward keeping peace must be well worth the effort.

0 comments on “Surprising Conflict Sources for Christian Students, Revealed Through Stories from Japan”