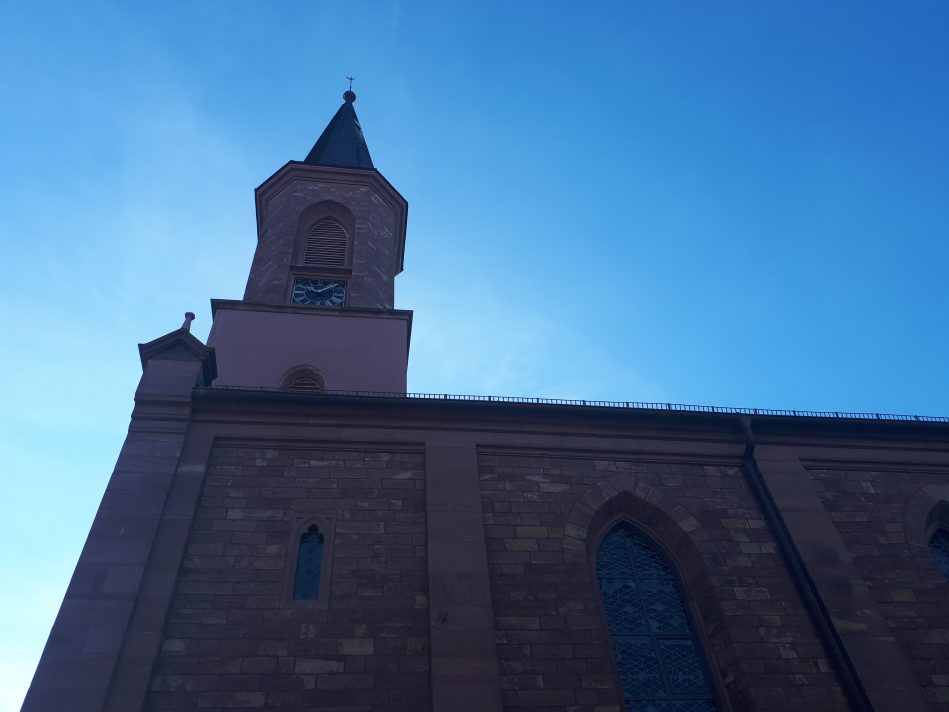 I might look ridiculous, I smiled to myself, but kept running. Perhaps never in the little village’s long history had such a scene occurred—a Canadian, hiking boots and all, clutching a laptop bag while sprinting alongside the graveyard. But I couldn’t stop now; not when the bells bid me onwards.

Except for the fact that I’m late, the thought occurred to me, there might be something poetic about this—running towards a centuries-old church on a Sunday morning, the steeple bell tolling its summons against cloudless sky.

I stepped through the church’s arched stone doorway, a serene expression hopefully belying my recent dash, and slid into one of the wooden pews. That’s when I noticed the music.

I turned, hardly expecting to face the massive pipe organ which crowned the church’s rearmost wall. Suddenly, a roomful of voices arose all around me, uniting in resonance.

I tried to sing along to the German lyrics for this hymn and the next, improvising my way around the unpredictable notes until hearing a tune I recognized: a German version of Revelation Song.

A troupe of teenagers appeared at the front of the church, one holding a neon guitar.

This is a switch.

An upbeat riff began fluttering from the keyboard as the youth led the congregation in an English Chris Tomlin song. A young woman spoke shortly after, sharing her thoughts about what she’d learned from doing ministry in England and Uganda. She presented about her mission after the service as well, when the congregation convened for lunch.

Now THIS is a church that embraces the intergenerational body of Christ, I reflected, filling my plate with knöpfli, cheesy homemade noodles. The young and old meet together, worship in each other’s styles, and all contribute to the service.  The whole congregation also rallies to learn about, encourage and support younger member’s ministry giftings. And speaking of the young…I better find some students to interview!

I crossed the fellowship hall to sit with handful of young adults.

“So,” I began, after explaining the presence of my laptop at the lunch table, “what do most people believe here?”

“The majority isn’t really Christian,” answered a mechatronics student,” but I think most people’s grandparents–and maybe parents–are Christian, for tradition. So, students can somehow connect to the Christian faith, but they don’t really live it. They think, ‘Those are old things that don’t have any value to my live now. I have everything I need; I don’t see the point for why I need God and Jesus in my life.”

“Most people are not interested in Christianity anymore,” a physio therapy student later echoed, “like it doesn’t have anything to do with their life. Culture influences church more than church influences culture.”

An education student added, however, that multiple campus ministries did flourish on her campus.

“I think it’s the part of Germany that we live in,” she said. “We have many Christian communities here. Most students live at home and come to campus already with their youth group experience. I think the numbers are going down, but it’s still a lot more than in other areas of Germany.”

One Christian I spoke with, however, a bioengineering student, explained his story about searching for Christian community away from home. 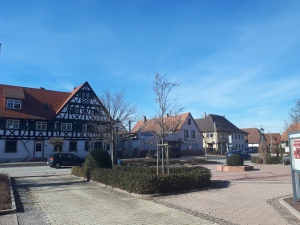 “If you move to a new city, you have to find a different church,” he shared, “which was really hard for me. For the first eight months, I stayed at my home church every other week to co-lead a service for children. Every other week, I tried to find something in my university city.”

Being only half involved in both church scenes, however, made establishing Christian community in this student’s new city extra challenging at first. Plugging into a mid-week campus ministry also didn’t go too smoothly, thanks to the unnecessary reality that–as I’d sometimes heard students in other cultures allude to–such groups may cultivate cliquishness.

“I guess they were nice people,” he reflected, referring to the campus ministry group, “but they were not that open–not that outgoing and able to invite someone directly into their circles. I went there for a couple weeks but it just didn’t feel right. So, it was really tough at the beginning.”

Eventually, he did connect to a church where he found more consistent, vibrant community. But even as I smiled at this happy ending, I couldn’t help but marvel how closely this story paralleled what I’d heard nearly half the planet away.

“You know,” I spoke up, “your story really reminds me of what Christians said in New Zealand.”

His grin mirrored my own.

“Oh yeah. I talked with a couple who runs a housing centre for Christian students there. They emphasized how critical it is for students to plug into a new home church in their university town–the sooner the better. To help students find a new church, this couple invites pastors to the housing centre, accompanies students to different churches, and encourages future students to start researching potential new churches well before moving away from home. They wished more churches in small towns would help connect their students to churches in the university cities. In fact, research confirms that students who have a connection like that made for them are three times more likely to attend church after they leave home!”1

Connecting meaningfully with a new Christian community, however, is only possible if that community is welcoming in the first place.

That’s another area where the students’ stories in New Zealand and Germany overlap–the importance of overcoming cliquishness in Christian communities.

In the end then, no matter what side of the planet a church assembles on, students there are especially likely to thrive under three conditions. The first is initial connection: before students can thrive in a Christian community, they need to somehow make contact with that community and be able to invest in it consistently. The second is interpersonal connection: after making contact with the community, students will only thrive there if they sense they belong there–not if they sense that the group would rather cater to an exclusive core. The third is intergenerational connection: students will thrive when they belong to a group with access to mentors, supporters and prayer warriors excited to release them into their God-given callings.

Speaking as a newly-graduated student myself, that’s the kind of church I’d be happy to run towards any day.

0 comments on “Cultivating Churches Where Students Thrive: Stories from Christian Students in Germany”