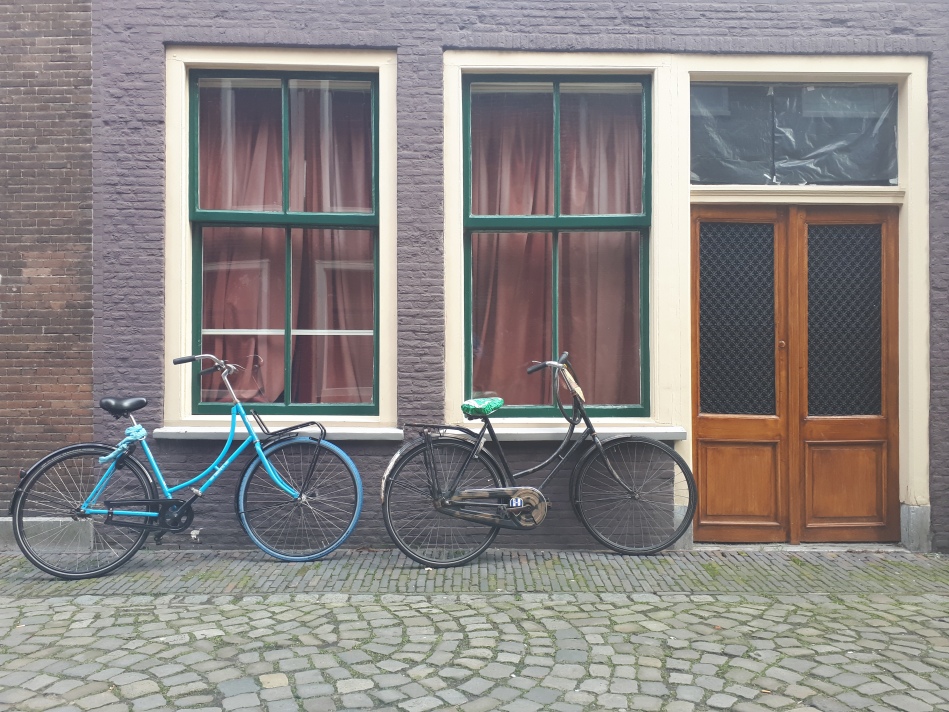 “Sure!” I replied, surveying the slender vehicle. I’d ridden bikes in Canada, after all. How much harder could cycling in Holland be?

I probably should have looked up local traffic laws before attempting this, I realized, already balanced on the lofty bike seat. But hey. I’ll just copy the other cyclists.

With that, I shoved my laptop in the bike’s wicker basket, took a deep breath and—wobbling slightly—took off down the brick-coloured cycling lane.

Ha. I joked to myself, it’s just like riding a bike.

I swerved around a corner, hand signaling like I’d seen other bike commuters do, and fell in line behind several cyclists at the next intersection. Before us, a traffic light glowed with the red outline of a bicycle.

Act natural, I coached myself. You’re just another local, one of thousands of young women commuters who cruise gracefully about with long braids flying behind their helmetless heads. You’ve done this a million times.

When the light blinked green, I ventured forwards, my otherwise intrepid voyage punctuated with awkward halts to check my GPS.

The blue arrow marking my location looked nowhere near my prescribed path, but the more earnestly I fought to correct my course, the further I drifted in the opposite direction! Clearly, the arrow had no idea where it was pointing.

Time for a little reverse psychology.

I started peddling 180 degrees away from where I thought I should go, which worked wonderfully until I realized that I’d been cycling the wrong way down a one-way bike lane. Backtracking, I took only one more mistaken turn before FINALLY finding the right house.

A smiling woman met me outside, introduced herself as an international church’s student ministry leader, and ushered me to her kitchen table. After we’d swapped our life stories over tea, she began sharing some of the best insights I’d heard about what it takes to be a mentor.

“It’s crucial for churches to acknowledge that students are planted in their university city for a season,” she began, “and that we, as a church community, all play a part in helping them blossom there and bear fruit. Of course, that’s God’s job too. A lot of churches, however, just let students pass through, leaving their discipleship to parachurch organizations. But students need local churches.”

Further confirmation of what the professor in Australia emphasized. Not attending church, he told me, is the biggest mistake students make. (See also: Being a Strategic Christian at Secular Universities: Insights from a Professor.)

“Christian student unions are amazing,” she added, “but students cannot thrive only on unions—just groups of same-age people. Unions are fantastic because they draw students together who have the student experience in common, but those students don’t necessarily become part of a wider body. They don’t see people the age of their parents, or their little cousins. They need to be part of the whole body and bride of Christ.”

A message I’ve heard emphasized ever since first interviewing students in Canada,  I remembered. (See Being a Christian Student in Canada: The Investigative Report, Part 2.)

“I want older people to be invested in the lives of the churches’ teens,” she continued. “Teens should be mentored by people who are wiser than them, while themselves mentoring someone else. I think it’s really important that local churches should not overlook that.”

“How does that work in your church?” I asked.

In response, she explained that the student ministry she leads is a church-run initiative which partners with a local campus ministry.

“We have two directives,” she stated. “One, we are the international church’s student group, made of students from all over the world who are Christian or are interested in Christianity. Everyone is welcome, but we do run a Bible study throughout the season. There is also another group led by a Christian student union, which runs once-a-month “fun evenings”—maybe a Dutch night with pancakes and licorice, or a Mexican night, or movie nights.  These are student-led events, and the idea is for other students to come and make connections there. We call this union the gateway to our church’s Bible study.”

That’s cool—the campus ministry group and local church work hand-in-hand here, complementing and feeding into one another. I couldn’t remember seeing a system like that before, except perhaps in Communist “Centrovia.” (See Codename Centrovia: Finding Christian Students in a Communist Country, Part 2.)

“This year we’re doing Corinthians,” she continued. “We meet for dinner, worship, and monthly social nights. Sometimes, we also have guest speakers present about different topics. We appreciate having a lot of grownups talk to students from their own professions, specialities or journeys; they’re our guest speakers. But I also love to pair these adults up with students, one on one. They are the mentors. We have a little mentorship course too, once a year.”

Yes! Mentorship, theme #1 which I’d been hearing all around the world, had shown up again, as salient as the salt in Dutch licorice. (See also Practical Ways to Disciple Students: Examples from the United Arab Emirates.)

“Essentially, a mentor is someone who will pray with, pray for, and journey with the students,” she defined. “If a student is particularly occupied with a future career, for example, I’d try to pair them up with someone who would have advice on that.”

As incredible as these connections can be, though, mentorship doesn’t have to be formal to be valuable.

“I think one of the main messages students need to understand from grownups,” continued the ministry leader, “is that it’s okay. Life turns out alright. Students get super intense about the decisions they need to make, so it’s really comforting and reassuring for them hear from a grownup who shares their faith—someone who can say, ‘You know what, I did this, and maybe made that mistake, but God is faithful. He worked it through, and it was okay.’” 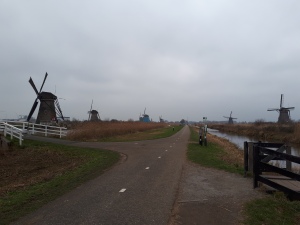 “I’ve heard of people countering that mentorship can be difficult because students don’t have enough time for it, or don’t want to connect with older adults.” I said. “Has that been a problem, in your experience?”

“Not at all,” she answered. “It has been the opposite for us. Students are craving mentorship. But we have the opposite problem: the adults don’t feel qualified to be mentors. So, we reassure the adults that mentorship isn’t about being great or experienced at something; it’s just sharing their journey. Whether they’re a homemaker or a CEO, everyone has a perspective that students don’t have. And that’s the main thing students crave. The best thing that can happen to a Christian student, in terms of mentorship, is not to be mentored by the ‘role’ that they want to play in the future—a super successful lawyer, for example; it’s being mentored by someone who is proof that God is faithful. And that comes in many shapes and forms. I think that anyone who’s a Christian is already proof that God is faithful. Our testimonies all point in the same direction.”

Now THERE’S a great definition of mentorship, I marveled. A mentor is anyone with a story of God’s faithfulness to share. (See also, What One Hamster’s Funeral Reveals About Mentorship: A Japanese Student’s Story.)

“How often do students and mentors usually meet?” I asked.

“The mentoring right now happens organically,” she answered. “Not every student wants to have dinner with a family. One of our students’ mentors is a lady from the church who’s a homemaker. So the student loves going to her house, playing with her kids and being part of their family life. But other students might want to meet their mentors at a café. The student union used to pair students up with families for dinners once a month, and students LOVED it. They liked the idea of being guests and just hearing kids yelling and eating. Sometimes, a messy dinner is just what they need.”

Again, however, misunderstandings about what mentorship entails can create barriers to forming these critical student-adult relationships.

“Failures that we’ve had are never on the part of the students,” she reiterated. “It’s on the adults. The adults seem to be busier than the students, or more hesitant. It’s easy for someone to think “I’m going to be mentored,” but it’s more intimidating for people to think, “I’m going to be a mentor.” So, we need to prepare adults better to be mentors, even to students as early as teenagers.”

“How can churches do that?” I asked. “How do we help teenagers and adults become better mentors?”

“If we have a generation of current students who have had the experience of being mentored,” she said, “it’s going to become a lot more natural for them to become mentors. So, we need to first invest in the local church’s adults to take that step, whether through a single mentorship seminar, or over a longer period of time. It has to be a church-wide initiative, something that can involve everyone. You don’t have to be a specific kind of person to mentor or disciple someone else—you just have to be a Christian kind of person.”

As exciting as our conversation had become, a quick glance at my watch soon warned me that if I wanted to interview students at the Bible study that night, I’d better start biking. Thanking my new student ministry leader friend–who I realized, had just mentored me over a cup of tea–I stepped into the semidarkness, unlocked my borrowed bike wheels, and tentatively set my GPS.

Time to see what the Christian students being mentored here have to say–if I can find them!

With that, I peddled into the shadows.

0 comments on “What it Takes to Be a Mentor: A Conversation in Holland”